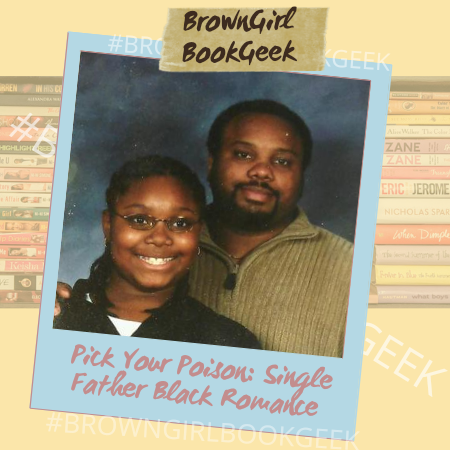 I know we typically get lists like this around Father’s Day, but today is my dad’s birthday and in celebration of my favorite guy, I thought I’d share some amazing single black father’s I’ve come across in some of my favorite black romance novels. There’s just something about a fine ass guy loving on his kids. Whether they’re comfortable with the role or still getting their bearings, I love to see single dad’s get their parenting on. Check out these books featuring single dads of many walks of life that will steal your heart and your attention.

School may be out, but class is still in session…

After a hectic school year with her classroom of first graders, Nova Grant is desperate for a break. So when her best friend invites her to spend the summer down in Miami, taking the vacation is a no-brainer. The only thing is, her best friend’s husband had the same idea, inviting his friend Guy Thompson to stay in the condo Nova was already guaranteed.

Set up or accidental… Fate or coincidental… the attraction between the two is undeniable from day one. But with their days under the sun numbered and plenty of lessons to learn between them, Guy and Nova still find themselves teetering the line of lust and love, even if it’s only for the summer…

Trying to put past hurts behind you is hard when your ex is a fool, but buoyed by child support and alimony, Jo Walker is moving forward with her life, pursuing a career, raising her little girl, and trying to live in peace. She believes she has all the bases covered in her world. But what about her heart?

Rap legend Everett “Big South” McClain is divorced, too, knows all about failed relationships, and has relegated his love life to casual connections rather than pursuing something real. That is, until he lays eyes on Jo.

She’s exactly what he never knew he needed.

He’s what’s been missing from her world.

Will she accept what he has to offer and let him love her?

***This novel contains profanity and sexual content. If you do not like those elements in your romantic reads, this is not the book for you***

The week of the culinary conference was Xander Northcott’s time to shine. Fresh out of a long-term relationship, he cemented his newly single status by accepting Piper Andrews’s invitation back to her room that first night. It was all fun and games until a few months later, when he received a phone call from the woman he barely knew.

She was pregnant—with his child.

Heralded as a culinary savant, Angel Saint Rose studied alongside the world’s best Chocolatiers. It wasn’t just a job for her. When honing her skills with chocolate confections, she was in her element—until she received a phone call that changed her life.

And killed her passion.

When Xander and Angel’s roads converge, can they call on each other to help find their way back?

Past relationships have left Nova scarred. Finishing up school and opening her boutique were her main focus until she ran into Grayson.
Grayson was worried about being a great father & his photography career when Nova ran into him, in the most literal sense.

Stable, safe, predictable – all words that aptly describe Professor Nadia Day’s life. An existence she’s carefully crafted for herself despite her unconventional upbringing and what, to her, is an unseemly past. More than anything, she wants to forget her unstable history, and the last thing she would ever do is rock the boat when it comes to her life and livelihood.

When retired football player and single dad, Nathan Moore, walks into her psychology classroom, all fine and dreadlocked, he does more than rock her boat – he rocks her world and causes her to question her buttoned-up existence.

Will the professor give in to her desires and become a student of love?

“This thing between us is unexpected for me…”

With her professional basketball career seemingly in her rearview, Micaiah Kennedy is trying to figure out what the future holds for her. Despite working tirelessly through her adolescence and adult years, she’d never quite accomplished the one thing in life that was the highest on her bucket list – playing for the Women’s National Basketball Association. Dreams of hooping in the W dashed, she instead set her sights on playing professionally abroad, going on to excel and make a name for herself outside of the States.

Victor Covington is a full-time single father and professional athletic trainer whose only concerns are making sure his baby girl is doing well and that the players within his care remain healthy and active. The looming unknowns of the pandemic however keep both of these precariously hanging in the balance, compounding his stress.

A serendipitous call from the Nashville Nymphs and an opportunity to check the last item off her bucket list sends Micaiah off to Florida where she reconnects with Victor, a former childhood crush. All grown up and still feeling the draw of attraction from their youth, Micaiah and Victor get reacquainted with one another in the confines of the WNBA bubble. Learning how to navigate in an unprecedented environment while getting closer to one another, Micaiah and Victor embark on a journey and discover that the road to getting what you’ve always wanted isn’t always the easiest.

Set in “The Athens of the South” Nashville, Tennessee, The “Nymphs & Trojans” series is a sports romance collaboration by Nicole Falls and Alexandra Warren that follows two fictional professional basketball franchises – the Nashville Nymphs Women’s Team and the Tennessee Trojans Men’s Team.

What’s done in the dark…

Murderer is a title she never expected to wear. Friend? Sure. Boss? Hell yes. But murderer? Never. If only she hadn’t threatened exactly that, just before someone winds up dead, and her fingerprints are all over the murder weapon.
Always comes to light…

All he wanted was to live a quiet life, without all the danger and darkness of his past. Those plans are blown when he’s accused of a crime he has nothing to do with, leaving him with a hard decision… remain in the shadows, or do what he can to help a friend?

When other crimes start stacking up – the handiwork of an anonymous suspect with an unknown vendetta, they’ll discover something that flips their worlds upside down…

A murder accusation may be the least of their worries.

Once again she’s back! Keisha Ervin that is, with her spellbinding tale of love, family, money and scandal. In this sizzling new story, Keisha introduces you to Mina Matthews. Mina is not your typical around-the-way girl; her dreams of making a life for herself outside the hood are now a reality. At the age of 25, she has her own full service salon, Mina’s Joint, drives a CLK55 and is engaged to Andrew, the son of the Mayor of St. Louis. To most, she has it all. But everything that glitters ain’t gold. Mina’s life is turned upside down when the man of her dreams and childhood sweetheart, Victor Gonzalez, re-enters her life. Suddenly everything that she thought was true is now a lie. Will her loyalty to Andrew overshadow her love for Victor or will the pasts of these two men bring her life to an end?

Busy Pierre is a thirty-year-old music schoolteacher in the big city of Saint Mountains. After a heartbreaking relationship and two years of celibacy, she meets Cress Williams, a successful oil-company owner who sweeps her off her feet and shows her a new world. Their relationship rapidly blossoms into something life-changing, but not every beautiful thing comes easy. A jealous friend and a bitter baby mama add problems to their relationship, problems which leave Busy wondering if she let her guard down to the wrong man for the second time.